Though it may be hard to believe, Brewery Creek still exists. Yes, it is but a shadow of its former self, however, it is very much still there – flowing deep under layers of asphalt and concrete. The community of Mount Pleasant (Vancouver’s first suburb) developed around the waterway we now know as Brewery Creek.

First Nations people used the creek for thousands of years as a source of fresh water and sustained themselves with the animals and plants that thrived in and around it.  In a video on the Remembering Brewery Creek website, Coll Thrush, professor of History at UBC, says the story of Brewery Creek is a story of “settler colonialism” and “industrial capitalism”.

So, “settler colonialism” and “industrial capitalism” destroyed in only 50 years what had been thriving for millennia.

But all is not lost. Despite our best efforts, Brewery Creek is still very much alive. You can see it in the landscape of the city. Heaving sidewalks and roadways; wonky, tilted fences; and flooding basements and underground parking garages all indicate the power of the creek’s still flowing water (especially after heavy rain). You can hear it as well. Standing near storm drains or manholes along its path (and along the paths of the other buried streams of Mount Pleasant) you can hear the water flowing. 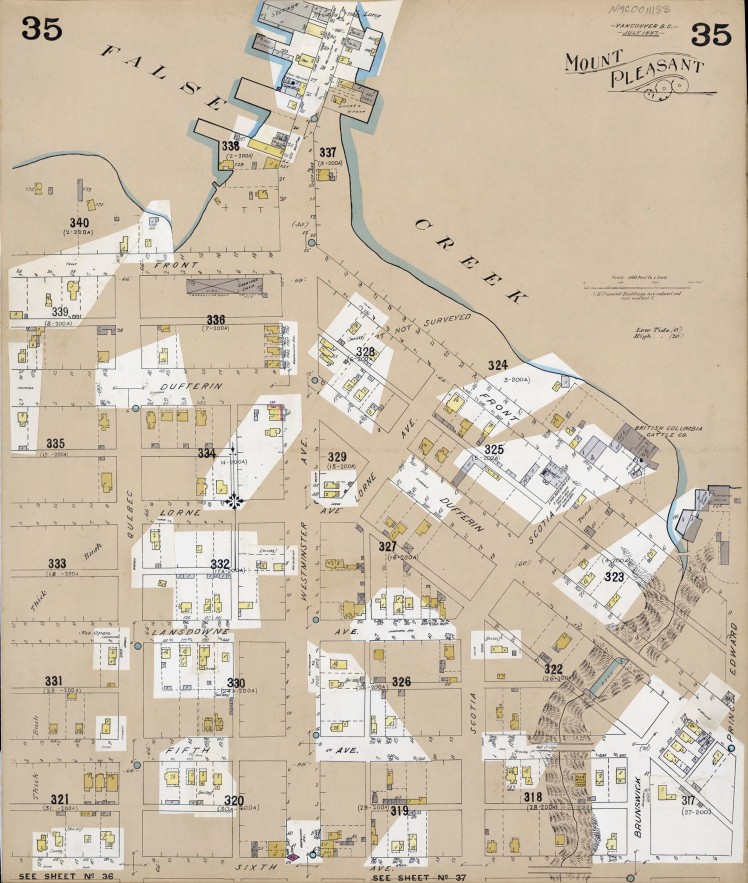 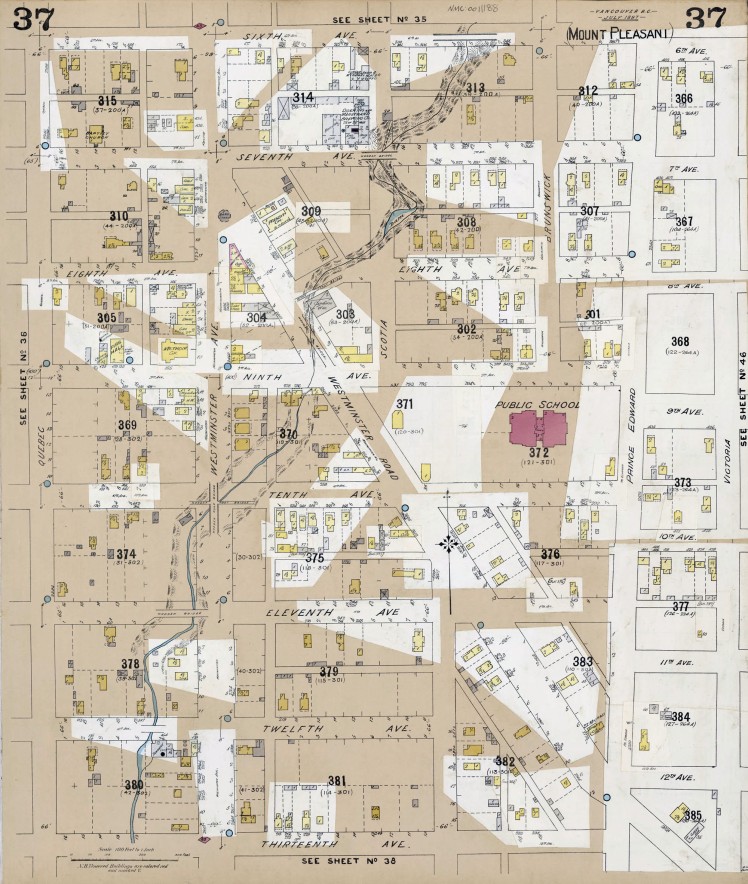 Jazz wasn’t the only genre of music that could be heard on the 2500 block of Watson Street (see LHAC Day 6). Punk rock also had its musical moment in this corner of Mount Pleasant. Before the current condo/retail building at Main & 10th Avenue was built, the ravine was still very open.  A wooden catwalk going from Watson Street led people over the ravine to the backs of the buildings facing Main Street. In the photo (top) from 1958, you can see the ravine, the catwalk and the building (which looks like a pitch roofed house) that was the DOA & TT Racer practice space in the late 1980s and early 1990s. (Also visible in the photo is the Broadway Theatre and the 1895 Abray House.)

In the video clip below, DOA’s Joey “Shithead” Keithley reminisces about the time when DOA and TT Racer used this spot on the edge of the old Brewery Creek ravine as their practice space. Including how they would cross the “wooden walkway” to get to and from their old practice space, occasionally tossing an old beer can or two into the ravine along the way. [Ostensibly to be collected later and recycled.]

From Watson Street, on the south side of 1895 Abray House, one can still view a very thin slice of the Brewery Creek ravine between the two buildings.

The Brewery Creek ravine was featured in the video for DOA’s cover of Terry Jacks’ song “Where Evil Grows” (below); recorded in 1990 as a benefit single to fight the pollution and contamination of Howe Sound.