Day 1: The Mount Pleasant car barns once had a resident cat named ‘Toots’…

Established around 1888, Mount Pleasant is one of Vancouver’s oldest neighbourhoods and it’s first suburb. The neighbourhood really started to grow after the introduction of the BCER streetcar service – the Fairview beltline- in 1892. As Vancouver grew, so did the streetcar system. In 1906, the BCER bought the parcel of land between 13th and 14th Avenues (bounded by Main Street on the east and Quebec Street on the west) to erect car barns and a repair shop. The car barns initially only took up a small portion of the lot, but since the company purchased the entire block, the BCER was able to expand. Which they did in 1913, eventually taking up the entire city block. The car barns were two-tiered to compensate for the grade of the property at the Main St side vs the Quebec Street side. Streetcars could enter and exit at grade from both sides.

It was at these car barns that Toots served as the Janitor-Cat in the late 1930s and early 1940s. First of all, I never knew there was such a thing as a Janitor-Cat, but apparently, there was. We first hear about Toots from a letter she sends to the Janitor-Cat at The Daily Province’s Tillicum Club (the children’s section of the paper) via Diana Gray the human behind the Tillicum Club column.

My name is Toots, and I am a lady janitor cat at the Thirteenth avenue car barns. I collect pennies to obtain my meals. Each pay-day I place a milk bottle with a slit cut into the cap by the time clock and the men drop their odd pennies into it for me. Quite often I find nickles and dimes in it also. I have my picture pasted on the bottle with a beautiful ‘Meeaoww’ printed above it. Last payday I collected forty-three cents.

Confidentially, do you ever manage to get one of the many pigeons I see around Victory Square? Thanksgiving Day, being a holiday, there was no one here to open a can of food for me, so I climbed up on top of a cupboard and kept my eye on some nice fat pigeons that were walking around the floor, and when one came close enough I ‘cat-a-pulted’ down and made a perfect 4-point landing. Don’t ever make the mistake I made and leave a bunch of feathers lying around. I suppose that it the ‘cat-as-trophe’ had happened to a turkey nothing would have been said about it.

I get a pint of milk with the cream off the top of a quart bottle of milk, every morning, direct from the farm. One of the men called ‘Curley’ keeps a cow in Burnaby and another man named Frank, buys a quart every morning and gives me half.

If this Diana Gray person ever mistreats you, just leave the place and come up here and be independent. This place covers a whole city block, and it gets very lonesome at nights walking around by myself.

I am enclosing a photograph of myself taken a short time ago. The picture shows me with a black nose, but mine is really shell-pink. I guess I must have had some soot on my nose when the picture was taken.

Sadly, the photo of Toots was not published, but we do have a photo of the Janitor-Cat at the Province: 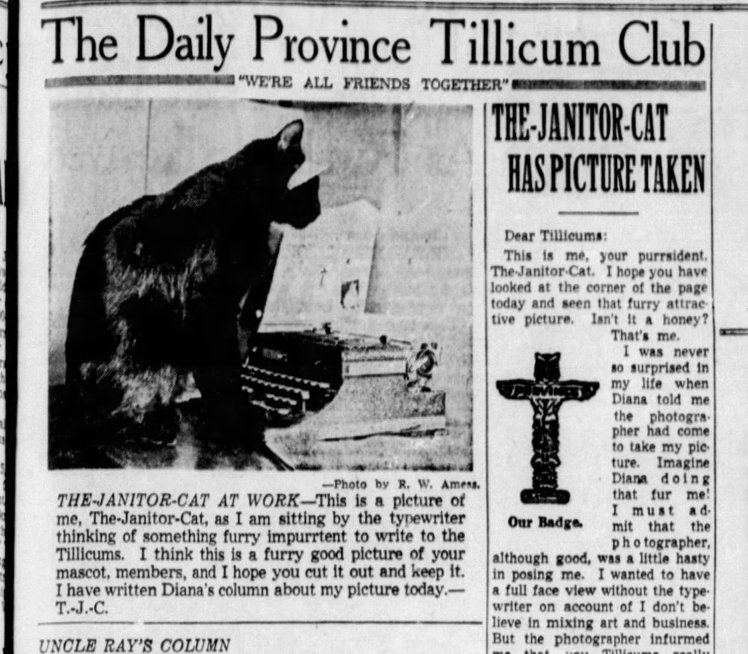