Day 19: Loggers once “invaded” the city at Christmas… 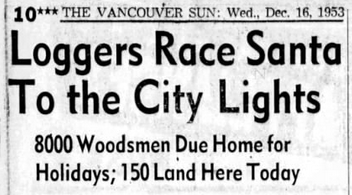 There was a time in this city’s history when the newspapers would not only announce the seasonal arrival of the first Mandarin Oranges, but also announce the seasonal arrival of the annual influx of loggers. All during the week before Christmas the city’s population would swell by the several thousands as the woodsmen arrived by steamship from logging camps on Vancouver Island and the Mainland.

“When you’ve been in the woods for a month the bright lights of the city are attractive. After six months they become an obsession”

That’s the way 32-year-old logger Harry Greene described, in a 1954 newspaper article, how loggers feel about the months of isolation and toil before they “burst out of the woods” for Christmas and head for the “big city”.

During the loggers’ annual Christmas trek to Vancouver they would arrive in their “store clothes” with their pockets full of “wooden dollars”, ready to spend and celebrate the “way of men who play as hard as they work”. For some of the single men, this may have meant going to the beer parlours and “chasing women” (especially in the early days), but for most it meant spending the seasonal “lay-off” with family and friends.